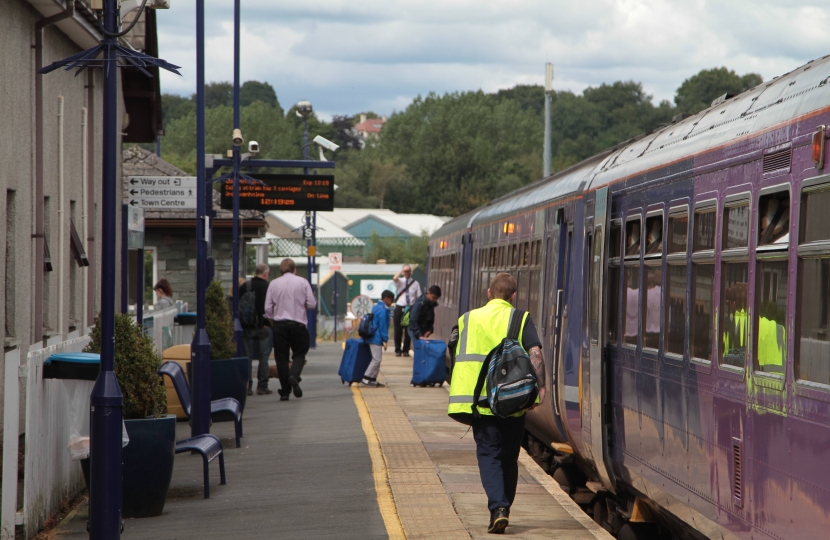 Passengers on the Lakes Line, between Windermere and Kendal, will enjoy faster and more comfortable journeys ahead of originally scheduled under new plans announced by the Government today (20 July 2017).

Direct services between Windermere and Manchester Airport will increase from one to four per day from May 2018, and the Government has also announced plans to introduce brand new trains on the line from December 2019.

Conservative Parliamentary Candidate James Airey applauded the announcement saying: “Travellers will hugely benefit from these announcements. Journeys between Windermere and Manchester Airport will now be improved sooner and with less disruption to services and local communities.”

“Tim Farron’s unnecessary and expensive plans for the electrification of the Lakes Line have finally been booted into touch. They would have cost the public millions of pounds in taxes, caused huge disruption for passengers and local people across South Lakeland, and introduced intrusive wires and masts into the heart of the Lake District just at the point our landscape has been honoured with its World Heritage Status.”

“I think we should really be paying credit to the volunteers of the Lakes Line Rail User Group. It is they who met with Rail Minister Paul Maynard back in the Autumn and I am glad that local Conservatives were able to facilitate that meeting. Their constant work to make such a persuasive case for investment has resulted in this Government announcement which will benefit both local people and the many visitors to the area.”

“Undoubtedly, there is still work to do done, such as ensuring the quality of service between the direct services is maintained. My colleagues and I stand ready to work with the Lakes Line Group to build on today’s announcement.”