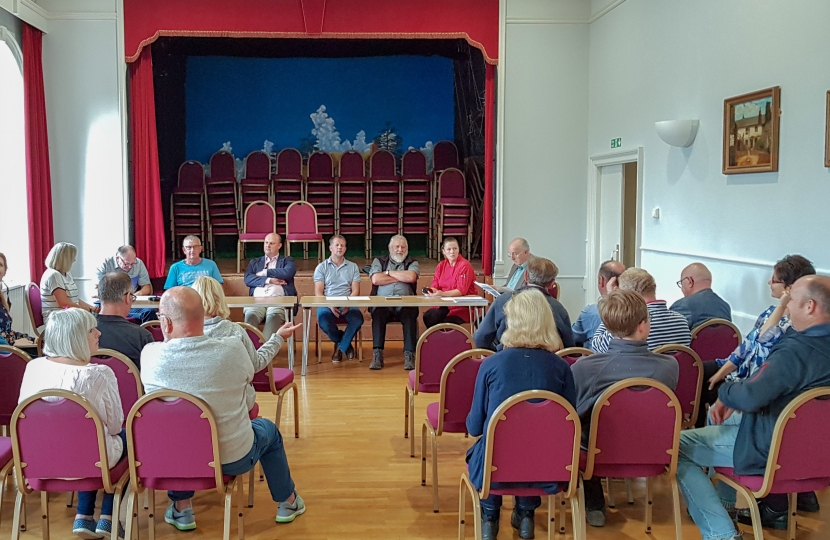 Residents and businesses in the Hawkshead area are demanding urgent action to help deal with the loss of the Windermere Ferry service following an engine fire in May.

At a public meeting on 7 June, Cumbria County Council was called on to improve diversion signs and fund extra public transport and a marketing campaign to boost tourism over the rest of the summer, as the deputy leader of the Council admitted the Ferry may be passed into private ownership in future.

The meeting was called by Hawkshead Parish Council and attended by more than 30 local residents and business owners, as well as members of Cumbria County Council, South Lakeland District Council and Claife Parish Council. Attendees also called for parking charges in Hawkshead to be suspended or reduced to boost the number of motorists stopping off in the village.

Councillor Matt Brereton, local member on both Cumbria County and South Lakeland District councils, said the meeting was “an important chance for the County Council to listen to concerned local residents, to learn lessons from what has happened and to acknowledge that to residents and business holders in the area the Ferry is a vital service linking communities and should be treated accordingly”.

Councillor Ian Stewart, Deputy Leader of Cumbria County Council, was also in attendance and gave a detailed timeline for the Ferry’s reinstatement. The revised timeline puts the estimated date to complete the engine repair as 12 October, but Cllr Stewart admitted there could be further delays as the Ferry would be subject to scrutiny before being certified to return to service by the Maritime and Coastguard Agency (MCA). He admitted the Council had “possibly – probably – not handled the situation as well as it could have”.

Cllr Stewart did not rule out the service being transferred into private ownership in future, as it was proving a drain on council finances even when running normally. He said the Council may look at upgrading the engine power source from diesel to electric either when the Ferry has its next major fit-out and overhaul next year, or when it is due to be replaced in just under five years’ time.

Attendees at the meeting in Hawkshead Market Hall questioned why it had taken council officers so long to order a replacement engine for the Ferry, and why there had been very little information circulated to local people and visitors about the Ferry being out of service and how to reach Hawkshead, Near and Far Sawrey and High Wray by alternative means.

It was also suggested that more effective permanent signage is erected too, as Hawkshead was a bit of a “blackspot” that is inadequately signposted even from neighbouring villages such as Ambleside.

The meeting also called for the Council to work with organisations including the National Trust to explore a mini-bus shuttle service between the Ferry at the west side of Windermere and businesses and visitor attractions such as Hill Top in Near Sawrey, Beatrix Potter Gallery in Hawkshead and Wray Castle.

Cllr James Airey, Leader of the Conservative Group on Cumbria County Council, pledged to step-up his calls for funding to support a marketing campaign for Ferry-hit businesses and communities.

Cllr Stewart also said the Council had no funding available to pay for a marketing campaign and suggested Cumbria Tourism use some of the money given to it in the wake of the Lakes Line rail suspension earlier this summer to help promote businesses in Hawkshead.

Improvements were demanded to diversion signs, which were deemed “woefully inadequate” and which went out “weeks late, some in the wrong places and others that were contradictory and just leading to more confusion” as motorists got lost or arrived at the Ferry landings only to find the service was not able to take vehicles or even bikes across.

Fiona Wilson, who runs two businesses in Hawkshead, said she had lost count of the number of times this summer where customers had telephoned from the far side of the lake saying they would miss their reservation because the hadn’t realised the Ferry wasn’t running, and that more often than not this led to missed business as it wasn’t possible to rearrange the reservation at short notice.

She also pointed out that business owners in Hawkshead had already produced a printed leaflet and circulated “open as usual” notices via social media, and called on the County Council and Cumbria Tourism to look at ways to fund a more widespread and longer-term campaign to help boost tourist numbers.

Cllr Brereton said the meeting was a “chance to share ideas, and to plan better for such incidents in future”. “It is a question of building resilience, and introducing systems that will not only aid local people and businesses in the short term while the Ferry is out of action, but that will also boost trade all year round, even when the Ferry is running again.

“The Council must consult better with local people in future, needs to show better leadership and has to acknowledge what a vital part of the local transport infrastructure the Windermere Ferry is,” he added.