Ben comes from a local family who have been in the Lakes for four generations. He was born in Kendal in 1988. Educated in Windermere and Barrow, Ben made the decision not to go to University, working in various jobs in Kendal and Windermere including Booths Supermarkets. In 2010 Ben began a trainee managerial role at his family business, English Lakes Hotels having previously worked in several hotel departments including Leisure Clubs and Reservations.

In 2011, Ben Berry chose to stand for the South Lakeland District Council seat of Windermere, Applethwaite and Troubeck after receiving muted reply from his then Lib Dem Councillor after a missed bin collection. Ben was successful in taking the seat by a margin of just seven votes. Ben has held various roles in the Conservative Shadow Cabinet at SLDC and was elected as Leader of the Conservative Group in 2016.

Ben is a keen fundraiser having raised thousands for charity with events such as the Low Wood No Wood Cardboard Boat Race and the 595 Bus Pull. Not limited to charitable fundraising Ben raises significant amounts for the Conservative party with events and an annual Cumbria Conservative Conference.

County Councillors have reacted with dismay to reports that ticketing on the Windermere Ferry is continuing to be a huge cause for concern for residents and visitors, leading to delays and tailbacks during peak periods and having a major knock-on effect for local businesses and tourist attraction

Two leading Conservatives at either end of the Lakes Line have expressed concerns over the disruption to local people as a result of proposed strike action called by the National Union of Rail, Maritime and Transport Workers (RMT) on Monday 13 March.

South Lakeland District Councillors have voted themselves an early Christmas present approving a 1% pay increase. The rise was approved by the Lib Dem-run council at meeting of the full Council last night (Thursday 15 December)

A German themed Christmas Market and Community Christmas Celebration, Windermere Ja, is coming to the streets of Windermere on Saturday 10th December and Sunday 11th December 2016. 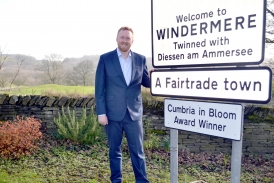