Within the Westmorland and Lonsdale Conservative Association, Roger has had a long and distinguished stint as both Chairman and President of the Association. He stepped down as President at the 2012 AGM.

Roger is proud of being able to serve his native area. Born in Milnthorpe, the son of a doctor, he went to Heversham Grammar School before going onto Cambridge, Nottingham and Manchester. He taught at the University of the West Indies in the 1960s and then became a Senior Teacher at four schools in the North of England including Skerton School, Lancaster.

By profession a historian, Roger Bingham has written 11 Local Books including ‘Kendal: A Social History’ and ‘Lost Resort -The Flow and Ebb of Morecambe’ and is a regular columnist in the Westmorland Gazette. He contributes earnings as a professional historian to local causes.

He has been an Anglican Lay reader for over 30 years. Roger is also a keen gardener and has won top prices in the Dalemain International Marmalade competition."

Councillor Roger Bingham supports a range of health and educational causes. He has been a governor since 1983 of Queen Elizabeth School, Kirkby Lonsdale. A supporter of the arts, he was once Cumbria’s cultural ‘czar’ and a long-term Director of Keswick’s Theatre by The Lake.

Roger's main concerns remain the wellbeing of the people ranging from being a County ‘Corporate’ parent, an Age Concern and Hospice at Home supporter, a lifelong Royal British Legion collector and a former member of the Cumbria Playing Fields Association until this unpaid position was abolished by Cumbria’s current Labour and Liberal Democrat administration.

2017 was a year of contrasting elements especially weather wise. The extremes of our weather system are becoming even more profound with an abundance of wet weather. We have had many instances of road and property flooding across our County and also in the Grange area. 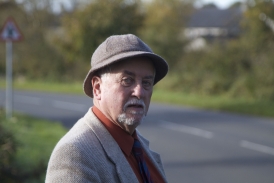 District Councillor for Burton and Holme